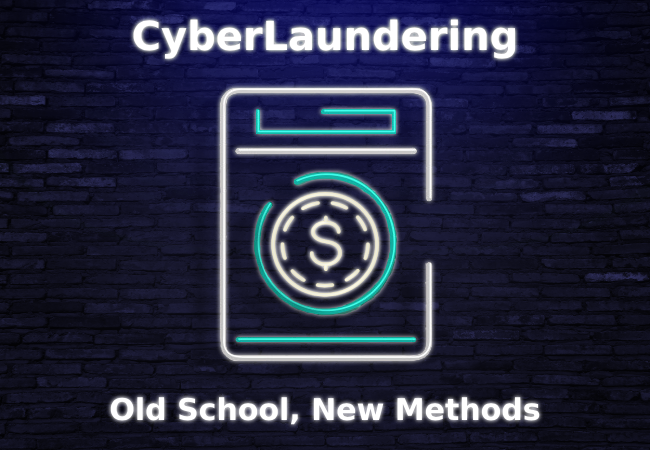 Illicit cash flows has become a major challenge on the global agenda in recent years. Approximately $2  trillion, or 5% of global GDP is laundered annually through our economies.

With the advancement of technology we are witnessing revolutionary changes, both in money laundering  and the fight against financial crime. In this respect, the use of emerging technologies becomes more and more significant. However, criminals are also increasingly exploiting new  technology for illegal purposes, which is a new component in their arsenal of organised crime, in addition to  their old mechanisms.

The link between money laundering and cyberlaundering

According to the UNODC, the stages of money laundering include :

– Placement (i.e. moving the funds from direct association with the crime)

– Integration (i.e. making the money available to the criminal, once again, from what seem to be considered as legitimate  sources)

While these well-known stages are still in play, cyberlaundering also includes modern methods that put a new spin on the old crime. Consequently, an understanding of money laundering old school techniques has two purposes : to successfully fight against this crime and to identify new threats.

The use of new technologies

Cyberlaundering is based on the concept of e-money. The latter can be described as monetary value which is not in physical form but is represented in an electronic format. Electronic cash has a number of advantages for launderers. For instance, it is not voluminous like regular cash, it can be transferred anywhere in the  world in seconds, it can lead to anonymous transactions and finally, it is not individually identifiable.

No financial institution, including digital platforms, is immune to money laundering. The criminals use legitimate financial services for laundering purposes, thereby harming such institutions. Online  banking, auctioneering and gambling are the main sectors that are targeted by criminals, due to the fact that they allow transfers of virtual currency through a simplified AML compliance check. Launderers can exploit the above-mentioned platforms to transfer money from one jurisdiction to another one, avoiding the regulatory safeguards to detect illicit financial flows.

Cyberlaundering is a new phenomenon, which is currently in the construction phase, as a proper legal concept. To this end, the legal framework in the area of money laundering serves as a legal background for cyberlaundering, which is essential to establishing an anti-cyber laundering regime.

In order to fill the huge gap, legal instruments should be put in place to establish the legal framework of  this relatively new phenomenon. This can be done through concerted efforts at an international level.